The Impact of Migration on Education

1. Overview
Education is one of the most important public services provided by government, representing a major spending commitment, in 2009-10 costing in the UK – England, Wales, Scotland and Northern Ireland - over £88 billion in total, of which three-quarters is specifically for pre-primary, primary and secondary education. Full time education in England is compulsory for all children between the ages of 5 and 16. Approximately 93 per cent of children are educated in local education authority -run schools financed by national taxation. The remaining 7 per cent are educated in private fee-paying schools or at home.

2. Migrants and Education in the UK: 1994 - 2008
The impact that migrants have on the demand for education is determined by two variables:

Data for the first of these – the ‘direct’ impact of immigration - is available from the ONS ‘Long Term International Migration’ (LTIM) database. Data for the second is available from ONS birth data. Children born in the UK to parents both of whom were born abroad are counted as an indirect consequence of migration. Where only the mother was born outside the UK, the number of children born in the UK is split, with only half counted as the indirect consequence of migration. In a study in 2002 the Home Office counted all children with one UK born and one foreign born parent as dependants of a UK resident, thereby refusing to include them in the number of ‘indirect’ migrant children. This assumption has been challenged, as mentioned in the report by the Economic Affairs Committee of the House of Lords.[1] Migrationwatch argued previously that the costs to public services of children with one migrant parent should be split equally between the immigrant and the UK-born population, and this is the convention used in this paper.

The ‘direct’ impact of migration on school age children is very small compared to the ‘indirect’ impact. This is because most migrants are of working age. ONS data on school age migrants only provides the total aged 16 or under, so not all of these will require the 11 years of education mandated by law – we make the ‘guestimated’ assumption that only half will in any one year.

For children born in the UK of migrants, we assume that all will require to be educated between the ages of 5 and 16, and all in the state sector. From the data on births a cumulative total of pupils can be calculated. Added to the data for migrant children, this yields the number of additional pupils in the state education sector who are present because of net migration. Using government data on the costs per pupil, the additional costs, both ‘direct’ and ‘indirect’, of net migration on the education system over the period 1998– 2008 can be calculated.

This estimate is subject to a number of caveats:

Table 1 gives data on total births in England and Wales broken down by country of birth of the mother, and net international migration of school age people over the period 1998 – 2008. To summarize the data in the table, between 1998 and 2009: 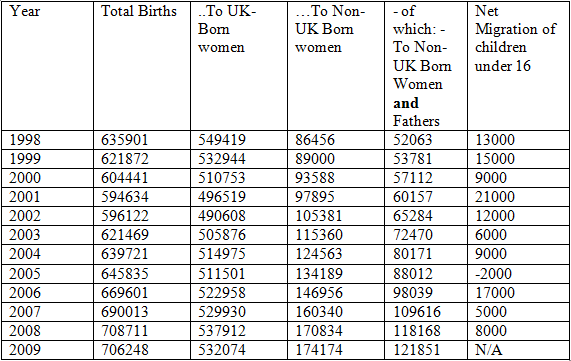 Table 2 translates the data in the previous table into actual pupil numbers and school places required, arising either directly or indirectly from immigration. Starting in 1998– and ignoring any migration impacts occurring in previous years – the total cumulative addition to school pupil numbers by 2009 is around 630,000 – in that year costing almost five billion pounds (£5 billion) in terms of additional public spending on education. This underestimates the actual cost because it excludes additional public spending costs occurring as a result of the special educational requirements of some communities. 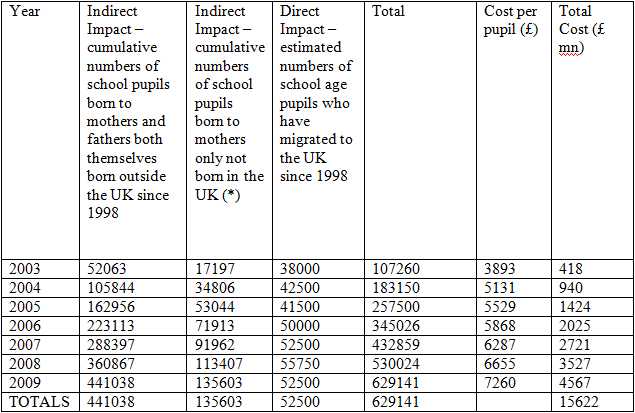 * absolute numbers are split 50:50 on the assumption that only half of such children should be counted as being a consequence of migration.

It is of interest to understand what the likely impact of immigration might be on future pupil numbers, school places and educational costs.

Over the next 10 years – to 2020 – one million more school places will be needed because of migration – overwhelmingly because of births in the UK to parents born abroad. Based on costs per pupil in 2009, the cost of these additional school places would be almost £100 billion over the ten year period. (Section 6 of this paper below explains the methodology for this calculation). 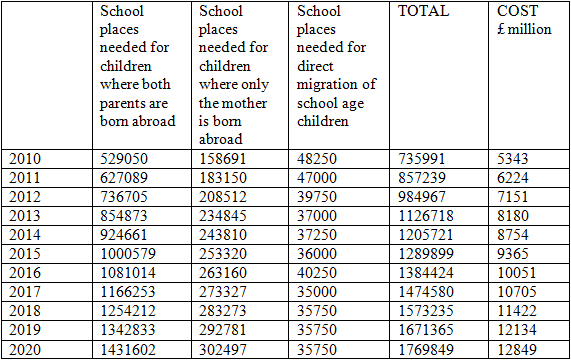 In the longer term, the ‘principal projection’ by ONS of UK population over the period 2008 – 2033, projects a total of births of 19.8 million, of which 2.3 million are projected to occur, directly or indirectly, because of net migration. It also projects a net inflow of around 4.6 million migrants, of whom around 4 % - 6,500 a year, or 162,500 over the 25 years of the projection - are assumed to be children under 15. Not all of these migrants, who will be of different ages, will require education for the full mandatory 11 years, so it is assumed for the purposes of this exercise that half will (the same assumption as made above). Adding half of 162,500 to 2.343 million and assuming that pupils stay at school for no longer than the mandatory 11 years, the number of additional ‘pupil-years’ is 11 x (2.343+0.1625/2) or 26.68 million. Assuming that the cost of educating each pupil remains the same in real terms as in 2009- 10, the total cost of educating these children would be almost £195 billion over 25 years, or almost £8 billion a year. It is important to understand that this is an additional cost to the previously mentioned annual cost of £5 billion for 2009 because it is a count of the additional costs caused by migration in 2008 and then for the next 25 years. Also, the assumptions that underlie this calculation are very cautious and conservative – for example, it is assumed throughout the 25 year period that the school leaving age is not raised (it almost certainly will - the previous Government proposed before leaving office to raise the school leaving age to 18 by 2013) And that pupils stay at school for the minimum period mandated by law.

The need for additional school place requirements is not the same as the increases in pupil numbers: it depends on the time-scale over which pupil numbers increase, the length of the statutory requirement for schooling, and the length of the projection period. School place requirements over a 25 year period would be less than the additional pupil numbers projected if it is assumed – as we do in this calculation – that the mandatory period of education will continue to be 11 years as now. Also, over a 25 year projection of births, since children are assumed to start education at age 5, the additional school places required as a result of births is calculated for a 20 year period because in the first five years of the projection period there will clearly be no requirement for any additional children born to be educated.

Taking all these considerations into account, we have calculated that the total additional number of school places needed to 2033 will be 1.3 million. If all these new places were to be provided by building new schools, this would necessitate up to an additional 3,800 schools (both primary and secondary). Around 75,000 additional teachers would be needed.

Total pupil numbers in schools in the UK fell by some 4 per cent in the ten years to 2009, reflecting the falling trend in overall births between 1998 and 2002. However, there is a growing body of evidence indicating the impact that migration, and an increased birth rate arising as an indirect consequence of this, are having on school places in certain areas of the UK. The data at local education authority level is sometimes anecdotal but it does suggest that in areas that have experienced high levels of net migration, pressure on school places is high and increasing. A recent article in the Daily Telegraph noted that pressures on school places in some areas of England were acute and likely to increase in future, due to increased births and migration. Virtually all of those education authorities specifically mentioned in the Telegraph’s article have experienced high rates of immigration in recent years. The average NIM[2] rate of the authorities in the table below is 6 per cent – over three times the average for England & Wales as a whole (2 per cent): 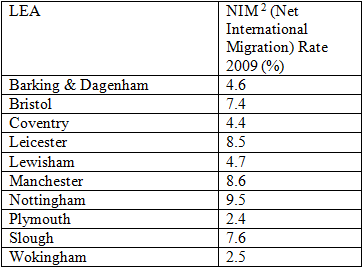 Below is further evidence from Birmingham, London and Peterborough:

"Councils in London are facing extraordinary demand for reception places in local primary schools. Very few boroughs have surplus school places and some have little or no capacity to offer reception places to new primary pupils. This additional demand, which affects three quarters of Boroughs in the capital, is expected to continue for the foreseeable future. London’s primary schools need to be expanded and new schools need to be built to ensure that there are sufficient places for five year-olds. However, the level of government funding available to build additional classrooms and schools to match the unprecedented demand for places in London is simply inadequate".

"For this financial year ending in March 2010, just over 2,250 children in London will be without a reception place and councils are being forced to consider a range of temporary measures to ensure education provision is made for these children. The shortfall in reception places is expected to increase to over 5,000 children up to the end of the current spending review period in March 2011. Based on current Borough projections, London faces reception place shortfalls of more than 18,300 in total by 2014".

It was noted that the rising birth rate in London had contributed to the huge increase in numbers of school age children, especially compared to rates in other parts of the country. Since 2001/02 the birth rate in London has grown by an extraordinary 20.5 per cent - the fastest rate of growth of any English region. This is significantly higher than the national growth rate over the same period of 16.8 per cent.

Increasing birth rates have an even greater impact at local level. Between 2001 and 2007, Barking & Dagenham experienced a birth rate increase of 40 per cent, Greenwich 36 per cent, Hounslow 29 per cent and Sutton 28 per cent.

The calculations of pupil numbers, ‘pupil-years’, school place requirements, and additional schools and teachers needed are underpinned by the following assumptions:

Pupil places are calculated from 1994 to 2020 and then from 2008 to 2033, to illustrate the impact that immigration is having now, and then over the next 10 years, on school place requirements, and then to look at the additional impact that migration is likely to have over the 25 year period of the government’s population projection.